Stop me if you’ve heard this one before.

You find a sponsorship prospect, more than likely through a website or a sponsorship form. You excitedly fill out the form or send an email. Perhaps you even pick up the phone and call.

When you get a response, it’s definitely not the one you were expecting. The prospect tells you, “oh, we don’t do sponsorship anymore.”

If you were here and could verbally stop me, I’m sure you would have by now, right? After all, many a sponsorship seeker has found themselves in this unenviable position at some time or another.

So what do you do? How do you handle it? Is this really the end?

I’ll answer those questions ahead, so don’t miss it!

What the Sponsor Tells You vs. What They Really Mean

As someone who was a former sponsorship seeker and worked with countless sponsors in that capacity and now continues to work with those in the sponsorship world in a consulting capacity, let me tell you a little secret.

Okay, so it’s not such a huge secret considering I’ve written about this very topic on the blog, but it’s still something that a lot of sponsorship seekers do not quite understand, especially the ones brand new to sponsorship.

When a sponsor tells you, “we don’t do sponsorship,” is that necessarily what they mean at 100 percent face value?

Possibly yes, but possibly not as well.

But here’s the thing. Even though I’m not a betting man, I would still hang my hat on the fact that more than likely, when a sponsor tells you, “we don’t do sponsorship,” that’s not exactly what they mean.

Instead, they’re trying to tell you in a rather gentle way that they don’t do your breed of sponsorship.

You know, like putting logos on everything and calling that a valuable asset.

There are also some companies that simply hear the word “sponsorship” and automatically assume that it’s either a.) gold, silver, bronze tiers, or b.) logos on everything or c.) all the above.

They don’t want that.

They also don’t want a couple of tweets mentioning them ahead of the event or a speech in their honor during the event where you name-drop them maybe 10 times.

The sponsor won’t vehemently agree to work with you if you have one meeting. They won’t throw boatloads of cash your way. You won’t even get in-kind sponsorship. It just isn’t going to happen.

Now, I know, in situations like these, it’s easy to chalk it up to that one prospect not being interested. If you keep reaching out to other prospects though, you will get a similar response from all of them.

You’ll also end up with a lot of wasted time that you cannot reclaim.

Some companies that have very outdated definitions of what constitute sponsorship might be interested in working together, but those opportunities will be few and far between.

When sponsorship works out in spite of what you’re doing and not because of it, it can establish bad habits that become harder to shake later. It’s almost better to get rejected, as you can change your tactics faster. 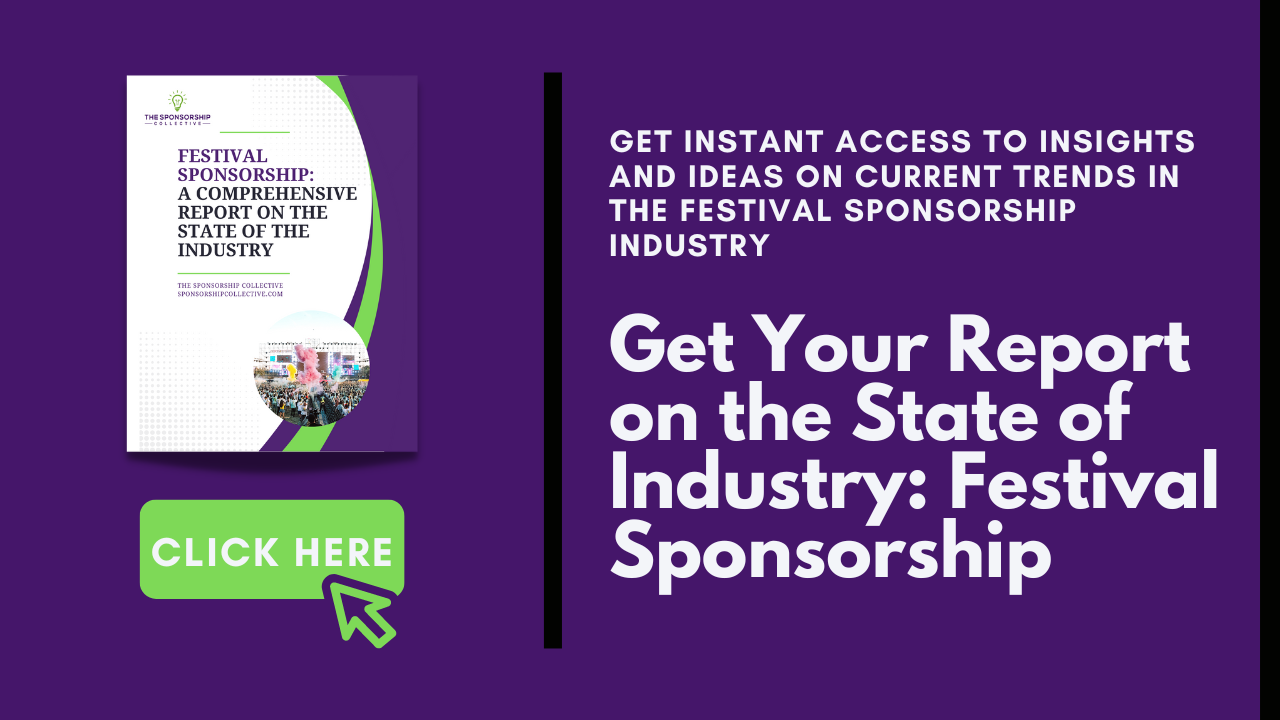 I know it’s frustrating to hear prospect after prospect tell you that they don’t do sponsorship. You’re getting nowhere fast with your sponsorship program. Meanwhile, if you have an event coming up, the clock is tick, tick, ticking away.

So what do you do in the face of this kind of response? Here’s what I recommend.

The first thing you have to do when you hear the dreaded reply of “we don’t do sponsorship” is look at what you’re offering the prospect.

If your assets resemble any of the assets that I discussed in the section prior, then it’s no wonder you hear this response from prospects so often. Without any changes, you’ll continue to hear the same thing.

Logos are not a valuable asset. I’m not saying to exclude them entirely from your sponsorship package. They do have their place, but it’s a very, very small place.

If you need further proof to scale back on the logos, then allow me to ask you some questions. What, besides very cursory brand awareness, does a logo achieve?

The answers to those questions, respectively, are no, no, and no.

It’s the same thing with a social media blast. Maybe you can generate some leads with social media posts, but you’re not achieving a sponsor’s other goals.

Name-dropping the sponsor in a pre-event speech also isn’t helping their cause either.

Look, it’s not easy nor is it fun to look at what you’re offering a prospect and say, “this isn’t working,” but sometimes, it’s exactly what you need to do.

Being willing to scrap what you have and start over can sometimes be the difference between finally getting a sponsor or continuing to hear nothing but, “we don’t do sponsorship.”

Don’t Use the S-Word

No, not that S-word! I’m talking about sponsorship.

As I said before, sometimes companies don’t like the word sponsorship. It’s why I don’t recommend dropping the word all over your sponsorship proposal and sponsorship package. It’s off-putting to a lot of prospects.

When you go into a phone call or an email with a prospect and you explain that what you offer is sponsorship, their knee-jerk reaction is to tell you, “we don’t do sponsorship.”

This goes back to my point from before. A company doesn’t want tired logo placement and stock sponsorship packages. That’s what they picture when they hear the word sponsorship.

As much as you can, try not to use the S-word. It might just be a matter of semantics, sure, but it does matter a lot to some prospects. 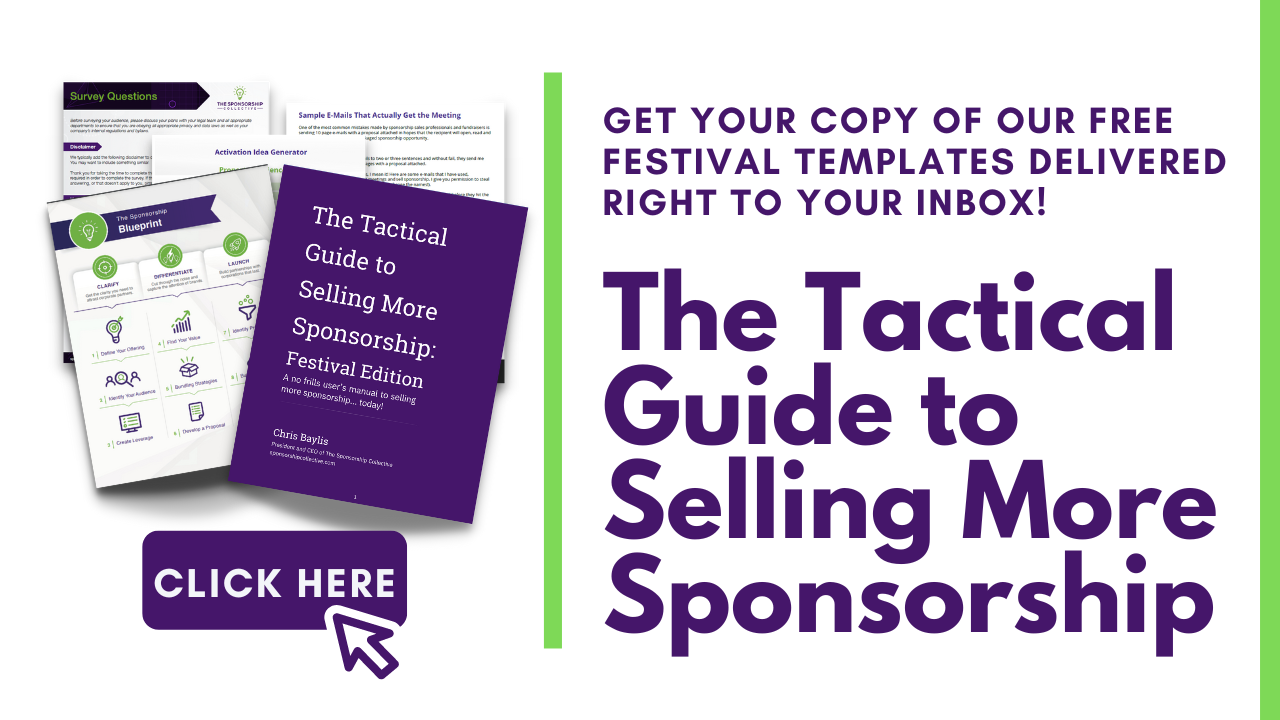 You’ve danced around the word sponsorship, but you’re still not totally sure what kind of deal your prospect is potentially open to. The only way to know is to ask!

If, asking a few questions, the prospect reveals to you that their company is way under budget for this quarter and they had to make some significant cuts, that’s very telling information.

You know this prospect probably can’t offer you a cash deal.

Rather than cash sponsorship, you might ask if the prospect could provide in-kind or contra sponsorship instead. This is where a sponsor gives you freebies such as food and drink or even merchandise in lieu of money.

They could even be a media partner. Unlike in-kind sponsorship, in which the company procuring the items does have to pay to obtain them, media sponsorship doesn’t always have to cost money.

If the prospect is waffling after you mention these other arrangements, then you know that their company may very well not offer sponsorship.

Continuing in the “never say sponsorship” mindset, if you sense that a prospect could be interested in working together, but they don’t want to follow the traditional definition of sponsorship, then it’s time to reframe your approach.

Instead, tell the prospect something like, “what if I could put 30 of your ideal clients in a room, and what if I could give you special access to them for networking and connecting like peers? And what if we give them a really specific experience that this audience asked for in a survey? Why don’t we build something where you’re working directly with your target audience?”

Do you notice what you’re not mentioning?

You’re not mentioning the word sponsorship, for one. You’re also not talking about logos, and you’re not being salesy, which is another way to quickly turn off a prospect once you two get into the early conversational stages.

You’re framing sponsorship in a way that sounds attractive. You’re still not calling it sponsorship, though.

Instead, the focus is not on the word, but about the audience experience, about giving the prospect the chance to connect with a new target audience.

Of course, you shouldn’t offer your prospects something that you can’t realistically provide. If you haven’t done audience research or if you don’t even know what I’m talking about when I say audience research, then you need to start at square one.

I have a lot of great resources on this blog that tell you everything you need to know about audience research.

If you are in a position where you’ve surveyed your audience, you know their pain points, and you can offer your prospect a solution as highly targeted as the offer described above, do you know what you’ll hear?

Even if a prospect initially told you that they don’t do sponsorship, they’ll suddenly sing a different tune.

Now they’ll tell you how they have room in the budget for the type of highly personalized opportunity that you’ve presented them.

The next time a sponsorship prospect tells you, “we don’t do sponsorship,” tell them, “neither do we.”

Instead, begin talking about how you want to help them connect to their target market and achieve their goals through customized solutions.

Omit the word “sponsorship,” but don’t replace it with a buzzword like “partnership” instead. The focus is more on what you can do for prospects and not what it’s called.

Once you start framing your sponsorship offers that way, you shouldn’t hear, “we don’t do sponsorship” nearly as often!

Chris Baylis is the President and CEO of The Sponsorship Collective and a self-confessed sponsorship geek.

After several years as a sponsor (that’s right, the one investing the money!) Chris decided to cross over to the sponsorship sales side where he has personally closed tens of millions of dollars in sponsorship deals. Chris has been on the front lines of multi-million dollar sponsorship agreements and has built and coached teams to do the same.

Chris now spends his time working with clients to value their assets and build strategies that drive sales. An accomplished speaker and international consultant, Chris has helped his clients raise millions in sponsorship dollars.